Vets Save Kitten Which Fell Into Recycling Machinery 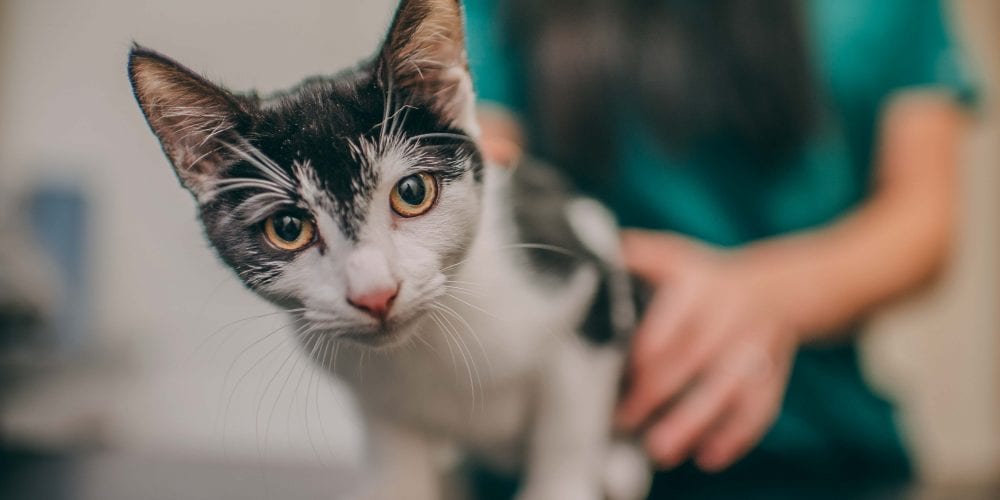 A STRAY kitten has cheated death and made a miraculous recovery from the horrific injuries it suffered after falling into a recycling machine.

The black and white cat – named Pip by her rescuers – was only five weeks old when she was discovered by workers at a recycling plant with a head injury as well as serious eye and ear infections.

But thanks to the quick thinking of plant workers and staff from rescue charity Warrington Animal Welfare, Pip was rushed to Beech House Veterinary Centre where a veterinary team battled for 24 hours to save her life. 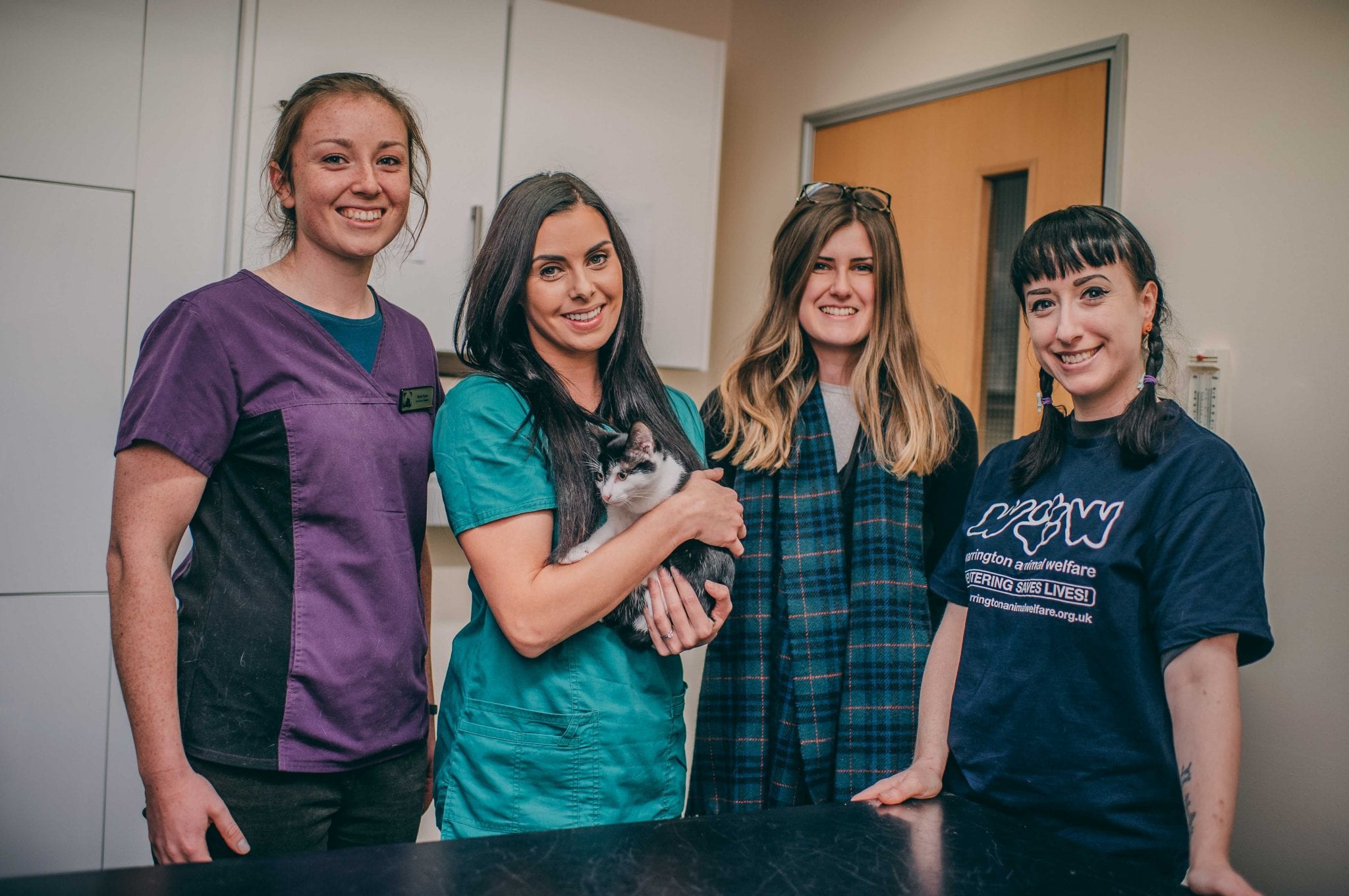 Despite her tender age and the nature of her injuries – which included a 90-degree head ‘tilt’ trauma caused by the fall – Pip confounded everyone’s expectations.

Several months on and the kitten has now bounced back to health…and into a new ‘forever home’.

Beech House veterinary nurse Laura Darlington, 30, who was on duty when Pip was rushed in, said it was initially touch and go as to whether the kitten would make it through the night.

“When Pip first came in, we didn’t really think she would live, as she was so young and with her head trauma it was really touch and go. Her eyes were so inflamed and swollen she could barely see, she couldn’t walk properly, and she had this worrying head tilt.”

So serious was Pip’s condition that Laura, who lives in Widnes and has worked at the Warrington-based Beech House Veterinary Centre for the past four years, feared the worst for the little cat, despite the team’s best efforts.

She said: “It was wonderful when overnight she started to eat on her own and looked so much brighter. The first 24 hours are always crucial, but she had survived.”

Beech House is part of the Willow Veterinary Group, which has 25 small animal practices, a referral veterinary hospital, two equine centres and a seven-office farm practice, located across Cheshire, into North Wales, the Wirral and Staffordshire.

The veterinary team continued to intensively care for the stray kitten, treating her eye and ear infections and using physiotherapy to encourage Pip to walk and regain her strength. “She was so lovely, but very small – you couldn’t help but feel sorry for her,” Laura added. 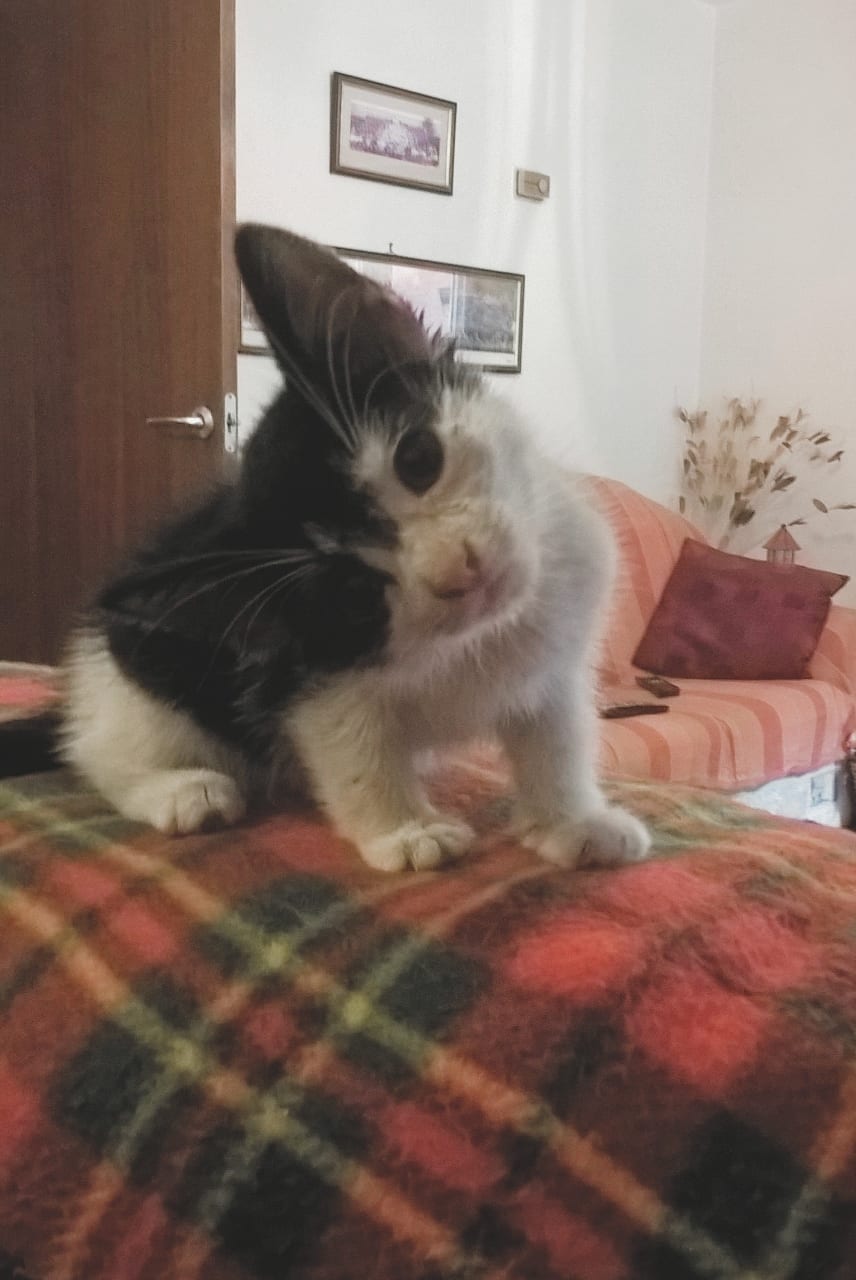 After two days, Pip was strong enough to be returned to the rescue centre, where Warrington Animal Welfare assistant manager Louise Allen took the lucky kitten home to continue with her rehabilitation.

Louise, 33, from Runcorn, said that Pip’s curious and cheeky character showed she was a real fighter, refusing to let the head tilt – which means her neck bends at an angle – get in her way.

“The first few weeks as her foster were quite intensive, as she was still on medical treatment for her eyes and ears. Finding food she could eat with her head tilt was a challenge, she would end up with gravy running down her face!

“But Pip had a strong personality from the beginning – she was very feisty and more of a playful cat than a cuddle cat.

“We don’t think she was actually feral, as she was very friendly and it’s possible her mum was a pet cat that went off to find somewhere quiet to give birth. And being the curious kitten Pip is, she most likely just went off to explore. She was incredibly lucky.”

Beech House vet Emily Guest said that while Pip will most likely always have a level of tilt to her head, there was no reason why she couldn’t live like a normal cat.

“Her head tilt is much less severe now and there is the possibility of further improvement as it can take months for neurological damage to repair itself. However, Pip may have a slight lifelong tilt and she just has to learn to adapt.”

Thanks to the love and care from Louise and the Beech House veterinary team, little Pip has continued to improve, with her head tilt reducing enough for the kitten to be put up for rehoming.  And just last month, Pip and her dramatic rescue story had its happy ending.

After seeing a rehoming advert on Warrington Animal Welfare’s Facebook page, 23-year-old Nikki Carters stepped in to provide the brave rescue kitten with a forever home.

Strategic management consultant Nikki, who lives with her husband Chris in Rixton, Warrington and already had two rescue cats, instantly fell in love with the ‘cheeky and wonky’ Pip.

“As soon as we saw her, my husband said we couldn’t leave her so that was that.

“She is very cute, she’s just doesn’t have very good balance. Pip will try and do cat things but can fall off things like the back of the sofa. But she just picks herself back up and doesn’t let the tilt affect her.”

The couple took Pip in as a nine-week-old kitten and now three months old, she is continuing to grow into a strong and healthy cat.

“Pip was wary of people at first but was really good with our two other cats Noodles and Charlie, in fact we think she leads them astray!

“She is getting to be really affectionate now and is very quirky. If it wasn’t for her foster at Warrington Animal Welfare and the team at Beech House, I wouldn’t have my lovely, wonky cat!”