Husky Bit Off More Than She Could Chew

A HUSKY bit off more than she could chew after a joint bone it had been given as a treat became wedged in its mouth.

Fourteen-month-old Rainy was rushed to Beech House Veterinary Centre in Warrington, part of Willows Veterinary Group, when the bone she was chewing became stuck over her lower jaw.

Vet, Tom Montgomery, who was on duty at the emergency out of hours practice, had to sedate her while he removed it.

Rainy’s experience has prompted vet Tom and owner Joanne Leacy to urge other pet owners to take care and make sure they supervise if they give bones to their dogs.

Tom has worked for Willows Veterinary Group for seven years.

Willows Veterinary Group offers a wealth of knowledge and expertise through a network of 25 small animal practices, a referral veterinary hospital, two equine centres and a seven-office farm practice, located across Cheshire and into Greater Manchester, North Wales, the Wirral and Staffordshire. Willows is accredited by The Royal College of Veterinary Surgeons 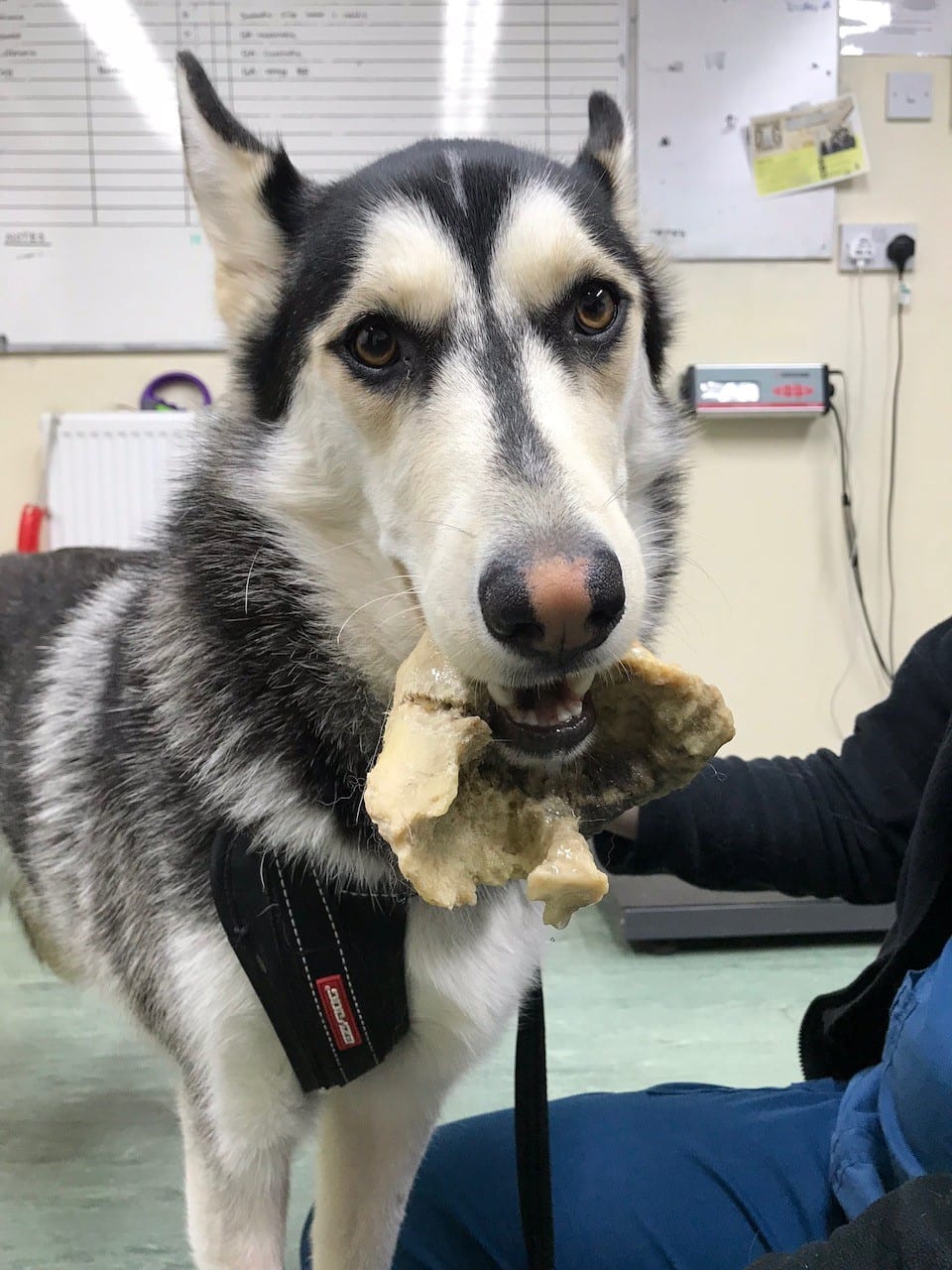 Tom said: “Rainy was brought in to out of hours with a bone stuck around her jaw.

“It wasn’t a life-threatening situation and she wasn’t in distress, but I had to sedate her because her owners couldn’t get it off.

“It’s not the first time I have had to remove a bone that became stuck in a dog’s jaw, but last time was much worse and I had to use a hacksaw to remove it.

“Luckily, in Rainy’s case, I was able to jiggle it around and pull it off myself.

“She was fine when she came round, she had some minor abrasions to her gum but there was no lasting damage.”

Tom added: “It could have been worse if it had been left there for a long time and if she’d been messing with it, as it could’ve causes grazes and ulcers in the mouth.

“It was good that her caring owners noticed straight away and brought her in to have it removed because it could’ve become very painful and sore.

“Rainy is a young, happy and lively dog and thankfully it all ended well.”

Rainy’s owner, Joanne Leacy from Birchwood, said she will take more care when giving her bones in future.

Recalling the incident, the 39-year-old said: “I have two Huskies and when they are good, they get a treat each.

“I buy boxes of bones off the internet and they were happily munching them one night while I was sitting watching telly.

“I happened to look down at Rainy who was looking back at me with her two bottom teeth stuck through a hole in the bone.

“I couldn’t get it off and neither could my partner so we had to take her to the out of hours vets.”

The mum-of-one added: “We weren’t there long before Tom sedated her and managed to prise it off. The team there dealt with it straight away which was a relief for us.

“Apart from being a little bit woozy afterwards, she was perfectly fine and I was relieved to be able to bring her home that night. 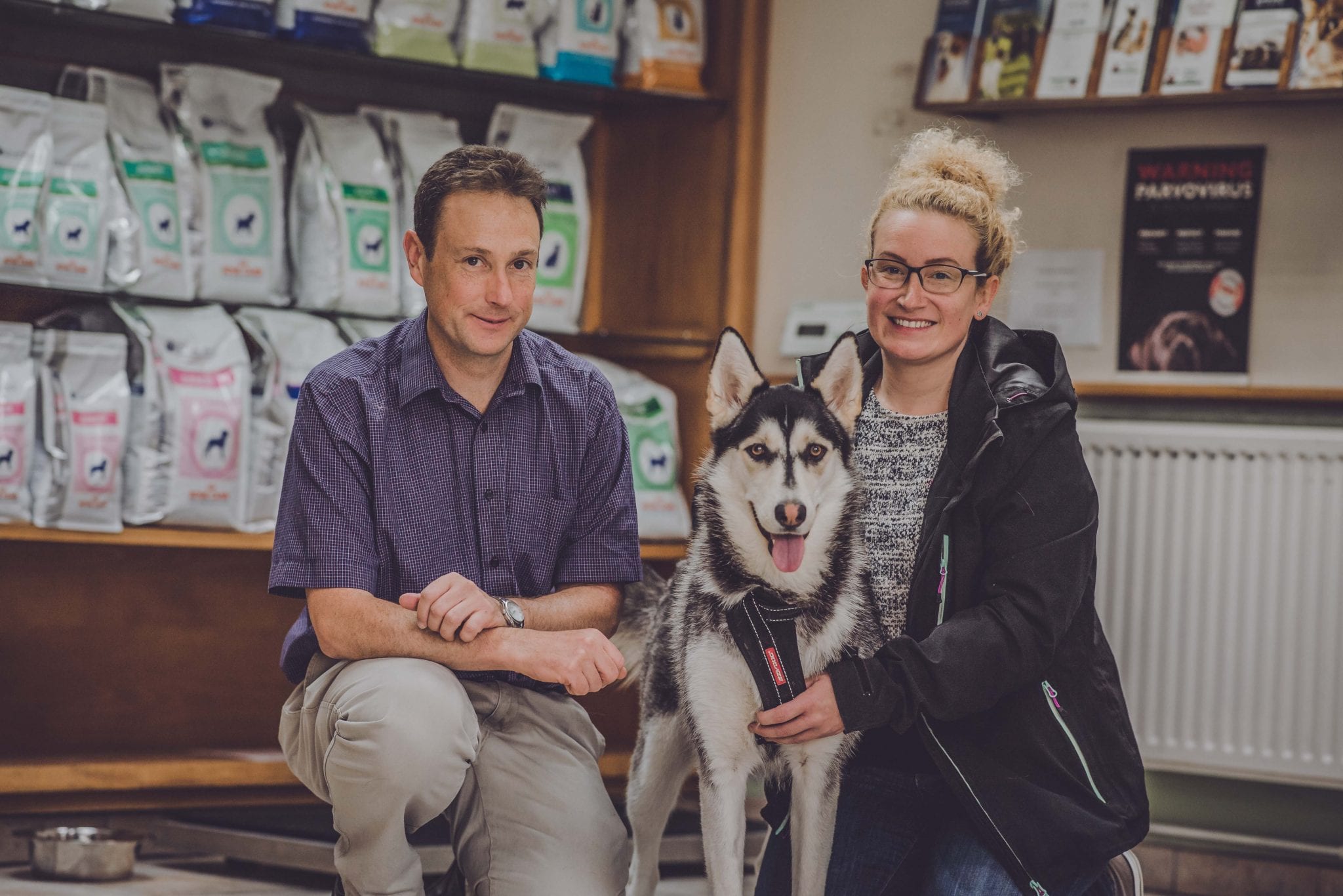 “I couldn’t understand how it got stuck on her face like it did. I’ve had dogs for years and never had anything like that happen before.

“But I will definitely be more vigilant in future and make sure none of the bones I give them have holes in.”

Tom said he has “seen all sorts” during his 21 year career including dogs with broken sticks wedged between their teeth and a Lurcher with fish hooks wrapped around its tongue.

He added: “If you do give your dog a bone, we would always advise owners to make sure they take care and supervise their dogs.”